Hello everyone and Happy Fall! I have decided to update my blog every two months now. The first year it was pretty easy to post about everything. Now I am going to hit the high points.

Happy Veteran’s Day and Heroes Week to all our Military Personnel! I had the honor and privilege of attending the Hogan YMCA Veteran’s Day Breakfast where I met two American Heroes, Sherwin Callander (who was at Pearl Harbor) and Warren Schmidt. I will forever treasure this photo of us!

On Wednesday of Heroes Week, I was honored to serve at the Wounded Warrior’s Luncheon held annually at Asbury UMC. I will never forget meeting these true American Heroes and their families. I also participated in the Veteran’s Day Breakfast and Parade in Huntsville. It was a beautiful day for the parade and I was thrilled to see so many people come out and cheer for our Veteran’s and Active Duty Personnel.

It has been a quiet week (for the most part) here in Madison with the schools on Fall Break and many taking time off.  With that said we still have plenty of things to share including;

The weather looks great for the next few days….please be safe and have a great weekend.

What a fantastic week of weather which hopefully will lead into another great weekend.  Several key pieces of information to share including;

As I close I again want to thank all of you for your hard work throughout the week.  I know I only touch on a few of the high lights that go on throughout the week.  Most of you simply do your job supporting the city as a small piece of a big puzzle.  Please know you are appreciated and that as a city we continue to make solid progress as a collective team.

Keep up that great work and hope everyone has a fantastic weekend!

We had a great couple of weeks….here are just some of the high lights.

This week is “Veterans Week” in the Tennessee Valley, culminating with the Veterans Day Parade in Huntsville Friday.  Thank you to all of our Veterans!!

Hope you have a fantastic week!

I hope everyone has had a great weekend.  Wanted to take a quick minute and update you on many of the happenings throughout the city including;

I look forward to see everyone at next week’s luncheon.  Please have a great week and thanks for all that you do to make our city better.

The much anticipated roundabout at the intersection of Balch and Gillespie will begin construction in 2018. A firm date has not been set yet. In addition to the roundabout we will be widening to 13’ Balch Road from Mill to just north of Gillespie. Here is a prototype of the roundabout: 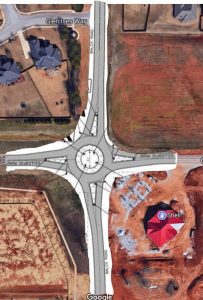 I expect construction will last most of 2018 and maybe in to 2019 depending on start day and weather. Much like Browns Ferry from Wall Triana to Balch it will be great when it is completed!

Your Community leaders have had two meetings at Three Springs. The administration has added an alarm system and also a cell phone monitoring system. We continue to meet monthly to express our concerns and learn of staff improvements.

I conducted a poll on Facebook about the interest in improving the animal shelter that we have in Madison. This is a picture of the current shelter. My thanks to all that participated and to those that have contacted me about improving conditions. You can read the poll results here Animal Shelter Poll.

The Christmas Parade will be Friday, December 9th from 5:30 to 7:30. I believe it will begin at Portal and end on Wall Triana in the same pattern as the Madison Street Festival. If you can’t make it to the parade be sure and go down Church Street and see Christmas Card Lane. Our local artists are very talented and it is a great way to get in to the Christmas spirit!

Town Madison is showing continued progress. There has been extensive construction work on the infrastructure. As you may have heard your City Leaders are looking at the viability and opportunity of bringing a Minor League Baseball Team to Town Madison. This possible stadium will be a multi purpose venue that can hold large corporate gatherings, City events such as Connect and even our own Bob Jones and James Clemens High School Graduations! You can read more about that here: Town Madison Update.

The Pulse Point app has been publicly launched in our community. This is a lifesaving CPR and AED app for your phone It’s available now for download on Google Play and at the I Tunes App Store. Please watch the video below to learn more about PulsePoint. Also, lease consider downloading this lifesaving app! While First Responders may be minutes away those first few seconds of a cardiac event are critical to a positive outcome.

From my family to yours we wish you a Blessed and Happy Thanksgiving!